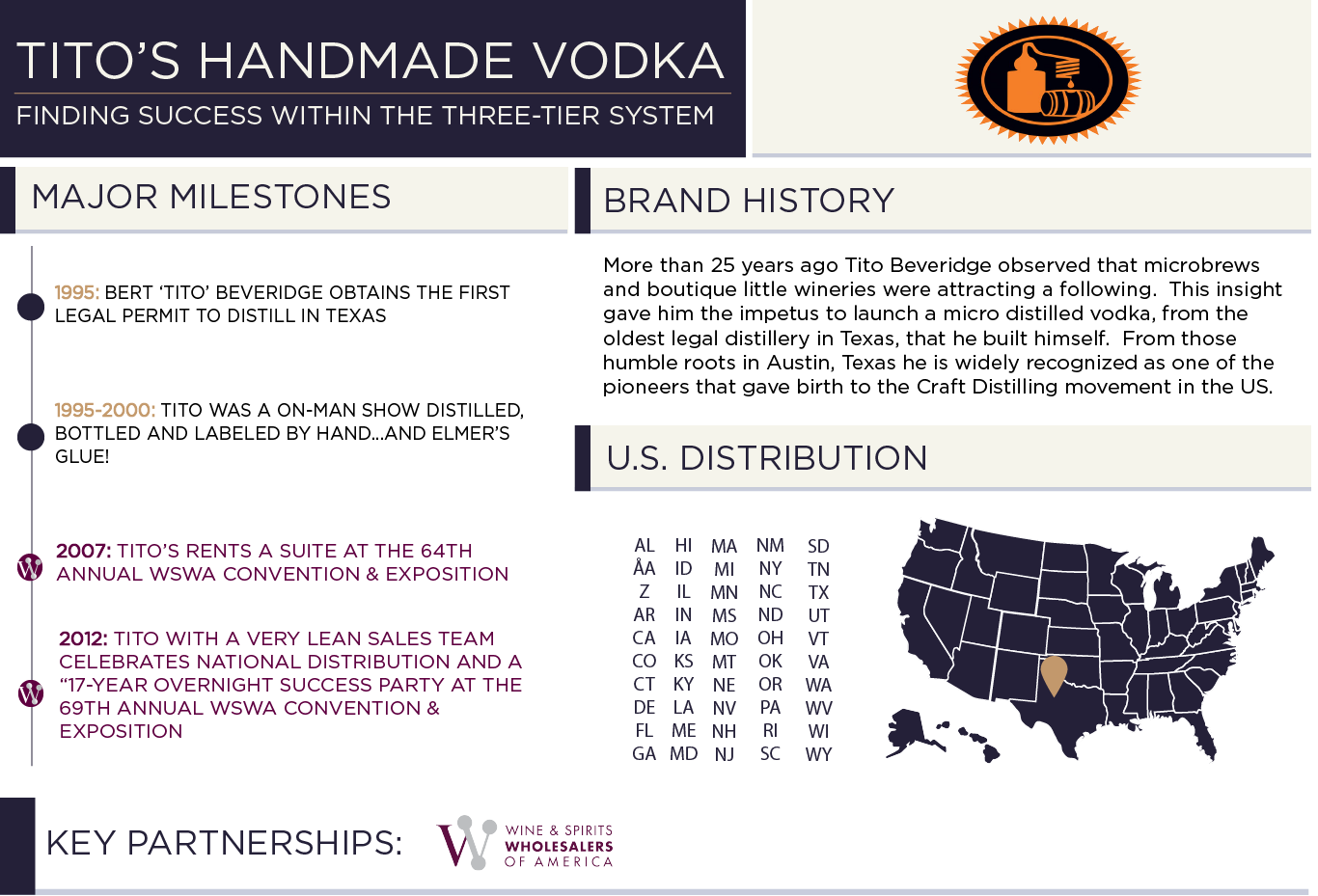 Q: Can you tell us a little about your brand story?

A: More than 25 years ago Tito Beveridge observed that microbrews and boutique little wineries were attracting a following.  This insight gave him the impetus to launch a micro distilled vodka, from the oldest legal distillery in Texas, that he built himself.  From those humble roots in Austin, Texas he is widely recognized as one of the pioneers that gave birth to the Craft Distilling movement in the US.

Q: Looking back, what are some of the major milestones to your success?

A: For the first 5+ years Tito was a one man show.  He Distilled, Bottled, labeled (by hand with Elmer’s Glue!) and worked with a few Distributors to gain distribution and sell his Vodka.   Most cases sold in those days came from Texas.  Little overhead enabled Tito to purchase used, antiquated equipment to help bottle as sales grew.  Tito heeded advice to attend the WSWA convention to meet potential Distributors.  From the WSWAå convention “bullpen” (exhibitors hall to display new products) Tito forged many relationships with Distributors across the US to take a chance on his Vodka.  In 2012, Tito with a very lean sales team, celebrated at the WSWA convention with Distributors across the US by hosting a “17-year overnight success party” honoring an unfathomable sales feat.

Q: Was there a specific tipping point in your brand story?

A: There were many tipping points in this remarkable story.  Tito would chain host 350-gallon drums of his vodka from the floor so he could hand fill one bottle at a time by spigot.  The ingenious contraption, graduated cylinders tied to a stick, sped the bottle process up so he could fill 6 bottles at a time!  Tito was proud when he could afford to rent a suite at a WSWA convention around 2007 but only one problem…none of the distributors showed up that first year.  With some new Sales help and better planning every convention since then Tito has rented that same suite. The productive distributor meetings annually in that suite have provided the foundation for Tito’s success today.

Q: Where are you distributed today?

A: Tito’s Handmade Vodka is now available in all 50 States, across Canada and in more than 150 countries around the world.

Q: Looking back, what were/are some key partnerships to your sucess?

A: Tito and his team attribute our success to a strong, very loyal partnership with the Distributors that took a chance on an unknown Vodka from Austin, Texas, in the early days.  The WSWA convention has provided a very efficient means to share his vision with our partners for the last 13 years and will continue to be a forum we take full advantage of in the future.