WASHINGTON, D.C., 09/28/2022 – Today, the WSWA Educational Foundation, in partnership with Morning Consult, released the findings of a new survey that measured perception of direct-to-consumer (DTC) spirits shipping among American mothers. Morning Consult surveyed 2,000 mothers nationally during a five-day period in August with an oversampling of target populations in New York and Texas — two states that will face DTC spirits shipping bills when their legislative sessions open in the new year.

“Regardless of geographic or partisan differences, mothers across the country agree on one thing quite strongly — the health and safety of the public needs to be at the forefront when considering laws and regulations about the sale and distribution of alcohol,” said Morning Consult’s Food and Beverage Analyst Emily Moquin. “Particularly, a majority of mothers are concerned that the DTC shipping of spirits will increase underage access and access to dangerous counterfeit product.”

Among the most powerful findings of the study was the near-unanimous (91%) agreement among American mothers that underage drinking is important for lawmakers to consider when deciding alcohol laws and regulations, with a majority (73%) considering this “extremely important.”

When asked, 72% of American mothers expressed concern that the DTC shipping of liquor/spirits across state lines will increase underage access to alcohol. These findings were true for both New York and Texan mothers despite geographic, cultural, and partisan differences.

Furthermore, a strong majority (78%) of American mothers3 recognizes the importance of alcohol distributors when it comes to the sale of alcohol as it relates to public health and safety. Again, these findings were true for both New York and Texan mothers despite geographic, cultural, and partisan differences.

Mothers surveyed were more likely to say that ID checks with DTC alcohol shipments — like those proposed for delivery through the United States Postal Service (USPS) or common carriers like UPS or FedEx — are less effective than ID checks done in stores or through local, licensed delivery.

WSWA has long championed local delivery from alcohol licensees, with delivery executed by their employee or a licensed third-party delivery company with ID-check training. WSWA advocates that the delivery person must conduct legal-drinking-age verification and provide beverages in safe, sealed containers with proper labeling. 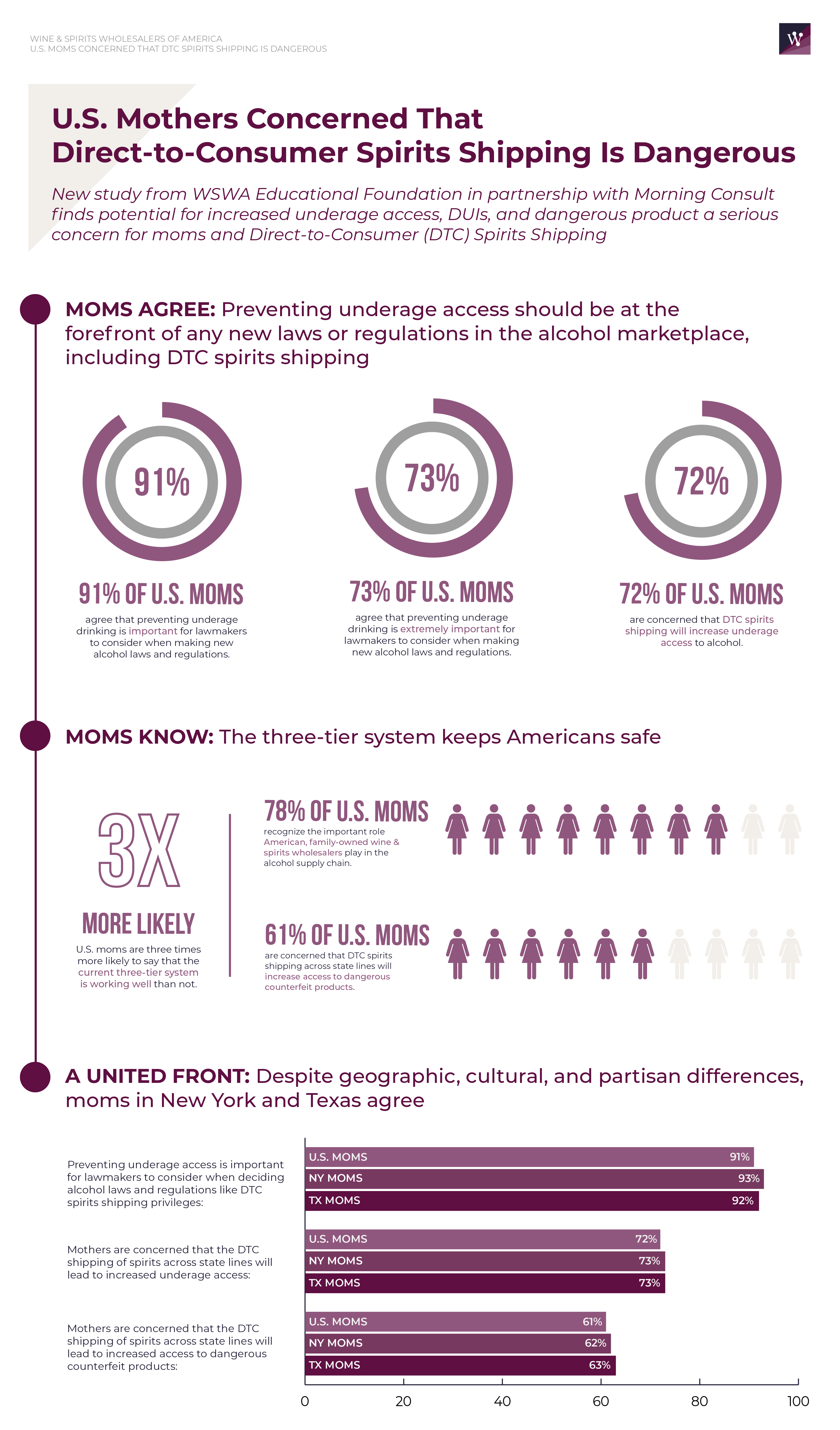 WSWA is the national trade association representing the distribution tier of the wine and spirits industry, dedicated to advancing the interests and independence of distributors and brokers of wine and spirits. Founded in 1943, WSWA has more than 380 member companies in 50 states and the District of Columbia, and its members distribute more than 80% of all wine and spirits sold at wholesale in the United States. The WSWA Educational Foundation is the charitable arm of WSWA and focuses on education initiatives and industry studies.

Morning Consult is a global Decision Intelligence company changing how modern leaders make smarter, faster, better decisions. The company pairs its proprietary high-frequency data with applied artificial intelligence to better inform decisions on what people think and how they will act. Learn more at morningconsult.com.

1,2,3 Asked of mothers who have heard of their state’s current systems regulating alcohol production and sales and at least have a sense of what they are.