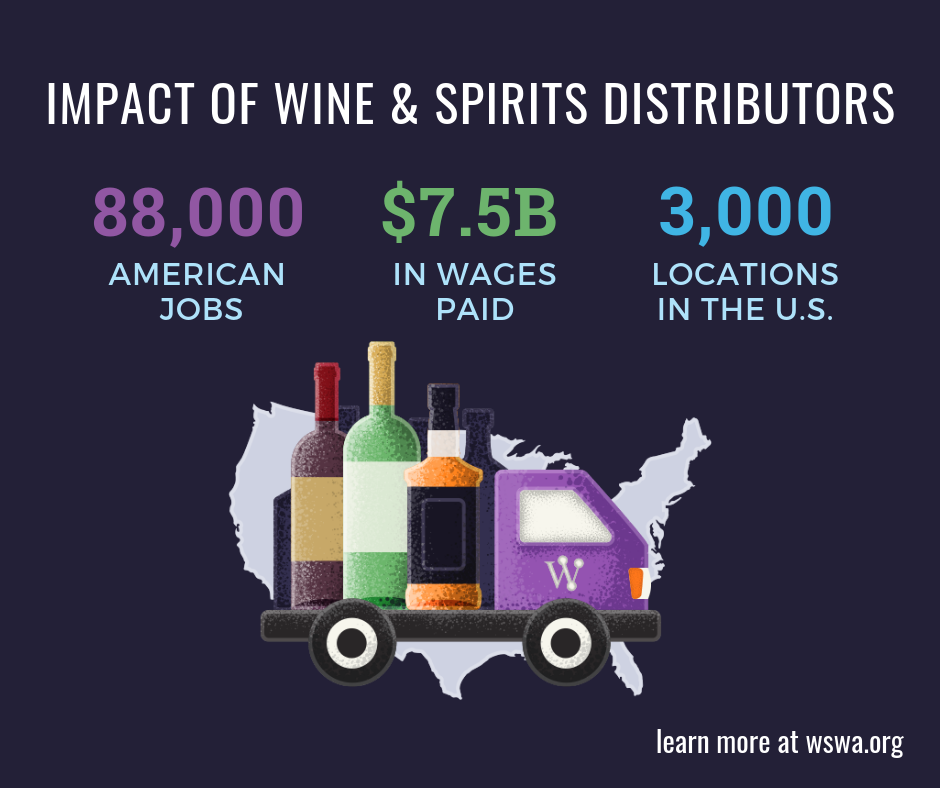 (WASHINGTON) — American, family-owned wine and spirits wholesalers deliver wine and spirits from every corner of the world to local restaurants, bars and stores— and are a major economic engine, according to a new study. Wholesalers employ nearly 88,000 Americans nationwide who earn a collective $7.5 billion in annual wages as part of an industry that generates $77.5 billion in tax revenue each year. Since 2016, wholesaler jobs have increased 19 percent and collective wages paid have increased by $1 billion.

This data is part of a new industry economic impact study and coincides with the launch of the newly-designed WSWA.org website, which tells the story of wholesalers and the three-tier system while highlighting the value and uniqueness of America’s beverage alcohol system. The economic data and WSWA.org website will support WSWA’s advocacy, advertising and media relations efforts.

“Family-owned wine and spirits distributors are the local marketing, brand building and logistics experts for beverage alcohol products in every state and congressional district in America,” said WSWA President and CEO Michelle Korsmo. “To perform this wide range of services, the nation’s wine and spirits distributors directly employ 88,000 Americans who earn a collective $7.5 billion in annual wages– a 19 percent increase in jobs and an added billion dollars in wages in just two years’ time. Distributors are a major force in the wine and spirits industry, with employees at 3,000 locations across the country who hold a range of jobs, including fork lift operators, truck drivers, mixologists, and marketing experts.”

“This study shows the growth and economic importance of wholesalers, and WSWA’s new website tells their story. Together, these tools underscore the value of wholesalers and highlight the robust beverage alcohol market we have in America,” added Korsmo.

WSWA’s industry economic impact analysis and ongoing studies are prepared by John Dunham & Associates based in Brooklyn, N.Y. The new WSWA.org website was designed by REQ.

WSWA is the national trade association representing the wholesale tier of the wine and spirits industry, dedicated to advancing the interests and independence of wholesalers, distributors and brokers of wine and spirits. Founded in 1943, WSWA has more than 370 member companies in 50 states and the District of Columbia, and its members distribute more than 80 percent of all wine and spirits sold at wholesale in the U.S.