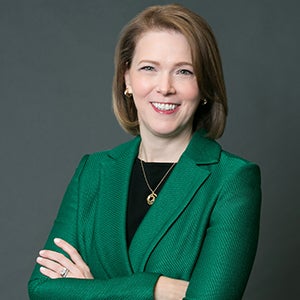 Michelle L. Korsmo is president and chief executive officer of the Wine & Spirits Wholesalers of America (WSWA), the national trade association representing the wholesale tier of the wine and spirits industry. Founded in 1943, WSWA has more than 370 member companies that employ over 74,000 workers in all 50 states and the District of Columbia. WSWA members distribute more than 80 percent of all wine and spirits sold at wholesale in the U.S. delivering the widest variety and choice of beverage alcohol anywhere in the world.

Korsmo joined WSWA after serving seven years as head of the American Land Title Association (ALTA), the national trade association for real estate settlement services and the land title industry. Among other accomplishments, under her leadership ALTA doubled both its membership and revenues, and tripled fundraising for its industry PAC.

Prior to ALTA, Korsmo served as executive vice president of the Americans for Prosperity Foundation. She was previously deputy chief of staff at the U.S. Department of Labor. In that role, she managed agency heads, served as a member of the budget committee, exercised approval authority on all official action to be published in the Federal Register, and developed an outreach program to the non-profit community.

Following her education at North Dakota State University, Korsmo started her career as a business owner in her home state of North Dakota, where she built a public advocacy and political consulting firm representing a consortium of organizations before the North Dakota Legislature.

She lives in Georgetown with her husband and three daughters.